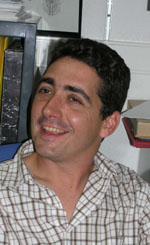 Birdsong is one of the most wonderful and surprising aspects of biodiversity. Despite a huge amount of research devoted to study of its meaning, origin and function, birdsong still remains a fascinating evolutionary enigma. The largest part of my research on this area comes from my PhD thesis (supervised by Peter Slater, St Andrews), in which I studied the role of sexual selection in the maintenance of song repertoires in the willow warbler Phylloscopus trochilus. My research compared individual variation in a whole array of song characteristics with several measures of reproductive success, extra pair paternity and survival. My interest for this subject has led me to expand this research phylogenetically, and thus I have conducted a study with Bettina Mahler (Buenos Aires Museum of Natural History), looking at the evolution of song in the Phylloscopus genus, and testing how sexual selection, habitat adaptation and morphology have selected for certain characteristics of song. Within my research on female yolk hormone investment, I have also studied the differential investment of yolk hormones by female canaries Serinus canaria, in response to variation in male song repertoire. My current interests in birdsong are the study of the interspecific variation in the timing of dawn song, and the role of song in the evolution and the maintenance of prezygotic reproductive barriers in the Iberian chiffchaff Phylloscopus ibericus.